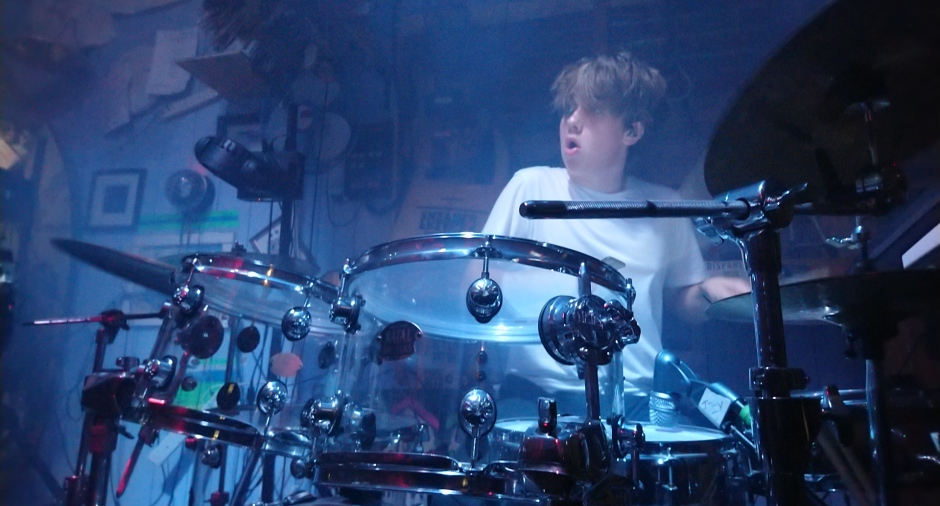 "Infectious drum beats remind me of late nights (or whole days) spent with good friends in crowded pubs and venues. It's safe to say this one is a mover and no doubt a crowd favourite in the making."

"Drummer Thompson set up and maintained a complex rhythm"

"Dylan Thompson's expert use of brushes belied his tender years."

"On drums, Dylan Thompson proved his worth by handling the different rhythms and time signatures thrown at him with the ease of a seasoned professional."

"Something very different ended the Meadow Stage as teenage indie pop sensation, Daniel Burnett, successfully nailed his slot. With bags of confidence, he arrived with a full band, two dancers and backing vocalists to offer something a little more like an experience rather than just a typical solo artist show. He may be deemed as pop, but the talented band take him to a new dimension as Nile Rodgers-esque funk mixes with dance and indie pop, but it all serves to create a fun atmosphere."

Cd Review - In Other Words

"Dylan Thompson is a real prospect. A drummer of immense promise, if he really wants to make it there’s nothing stopping him."

"Issie Barratt later complimented them as being the most “mature” group of their age that she had worked with - an accolade to treasure, coming from this award-winning music educationalist! Both she and James Brady singled out the solidity of the rhythm section. I would add that the ensemble playing was more confident and powerful than I have heard so far from Jambone and there were exceptional solos too. Dylan Thompson’s drums on Barratt’s Largo Days really conveyed the distant thunder she told us to expect and, on the same tune I think, Alex Thompson (sax) gave a blistering solo."

"A welcome and very enthusiastic drum solo from Dylan Thompson.  He may have been hidden at the back, but he made his presence felt!! "

"I vowed not to single any one of the young players out but, a special mention must be made of Dylan Thompson. Is he 14 or 15? his talent belied his tender years. Russell said he looked like a young Clark Tracey. He sounded like one too!

This was quite a night!" - Lance Liddle
Full review here - jazz-cafe-jam-session-april-18.html

In Other Words @ Prohibition Bar, Gateshead. November 12th 2016  ​Alex Thompson (alto saxophone & clarinet), Nathan Lawson (guitar) & Dylan Thompson (drums) Saturday, Prohibition Bar, Gateshead. Sold out. A fundraising concert organised by Alex Thompson to help him raise funds to make the trip of a lifetime to India in July next year when he will be digging wells, building classrooms and making many lifelong friends in doing so. Alex, 16, plays alto saxophone and clarinet in Paraffernalia, Gateshead schools’ big band. Alex was joined on the gig by younger brother Dylan on drums and their friend Nathan Lawson, guitar. They call themselves In Other Words.  Song for My Father, Ain’t Misbehavin’, Mercy, Mercy, Mercy, Bernie’s Tune, Come Fly with Me, Cry Me a River – and this just a selection from the first few tunes! These young men have assembled a pad of gigantic proportions and it continues to grow apace. Dylan, drum kit set-up on the small stage area behind the front line, looked the business in casual (no tie) jacket, Alex and Nathan seated out front, t-shirt order. Alex’s alto work indicated a firm grasp of the melody in question and Nathan’s rhythmic support impressed time and again, the bass lines particularly effective. At the back, Dylan, 14, played in the groove, a real prospect is D Thompson. Alex played some clarinet; Fats’ Ain’t Misbehavin’ and Do You Know What it Means to Miss New Orleans? the first of two numbers on his other, or ‘second’ instrument.  The audience, including David Blakey (Paraffernalia’s MD), listened intently, supporting three musicians of tomorrow. Drummer Dylan excelled on Jaco’s The Chicken, Nathan’s guitar intro set-up Fly Me to the Moon to which we all knew the lyrics…In Other Words! Their first set – one hour and ten minutes – couldn’t have gone much better. Prohibition Bar’s proprietor has worked hard to make the Brandling Street speakeasy the successful venture it has become, the atmosphere made for the occasion. The trio stepped off the stage to take a well-earned break, mingling with family and friends. Young Dylan Thompson took charge of the raffle – is there no end to the young man’s talents?!  The second set opened with some good alto from Alex on All the Things You Are and the trio followed up with a spirited take on Scrapple from the Apple. They took a Slow Boat to China, insisted It Don’t Mean a Thing (they’ve got it!) with a fun round of fours, and Alex’s fluent alto on Bye Bye Blackbird caught the ear. How about Minor Swing? And a grooving Chameleon? The Zutons’ Valerie made it onto the set-list, not exactly the GAS book, but why not? It’s a good tune. The trio, Alex, Nathan and Dylan, 16, 15 and 14 had to be dragged off stage some one hour and twenty minutes later. They were having fun. A third set of tunes wouldn’t have been a problem. In Other Words said good night with the Sonny Rollins’ feel-good number St Thomas. A thoroughly entertaining evening, there is no doubt whatsoever that we will be hearing more from Alex, Nathan and Dylan.  Russell. BeBop Spoken Here

JB’s Cats - Sage Gateshead April 16th 2016
​
Ben Lawrence (trumpet), Alex Thompson (alto saxophone), Alex Iles (piano), Nathan Lawson (guitar), Tom Henry (guitar), Alex Shipsey (bass) & Dylan Thompson (drums) + Dr James Birkett (MD)
(Review by Russell)
Early Saturday evening on the concourse at Sage Gateshead, tutor Dr James Birkett and his band of young musicians entertained an appreciative crowd for half an hour or so. A band of talented teenagers, some of them can be heard out busking across Tyneside, and, on occasion, sitting in at the big boys’ jam sessions.

Ranging in teenage years (and height) the young musicians showed no fear playing some standard tunes, taking solos and winning applause for their efforts. Opening with Herbie Hancock’s Cantaloupe Island followed by a spot-on tick-tocking Milestones, JB’s Cats purred like well-fed (tutored) pussycats. An excellent Cherokee, taken at a big boys’ lick, Tom Henry’s guitar solo on Song for my Father, Ben Lawrence’s extended trumpet solo on Goodbye Pork Pie Hat with Alex Thompson playing good alto on the same number, a mature performance from pianist Alex Iles, these guys impressed, big style! Bass player Alex Shipsey, the newest member of the ensemble, played as though he had been in the band for years and guitarist Nathan Lawson knew all the chords. And then there was the drummer. At the back, a budding Jimmy Cobb/Buddy Rich had it all covered…hi-hat, rim shot, snare, kicking bass drum, the name to note is Dylan Thompson. Tutor Dr James Birkett works with these guys week in week out, they’re going places. Jazz lives!
Russell. BeBop Spoken Here

18 and counting! Last night was one of those nights when everybody and their grandmother were there. On stage the age range went from 13 to infinity and they came from Norway and America as well as Durham, Sunderland and points west. I Thought About You and Someday My Prince Will Come by the house trio set the ball rolling. They were on fire from bar one and it served as an appetising taster for tonight's Cherry Tree gig by Peter, Paul and Steve Glendinning (guitar). From now on, with a few exceptions, it was New Faces - some barely reached puberty! Ben Dovinson blew Misty. Nervous at first but, by his next number, was it Blue Bossa? he'd gained confidence and justified the applause given. From Norway came Arvid Nordhus, a bluesman playing harmonica and shouting Summertime like as though he was from the Mississippi delta. Bradley on guitar for this one. Next it was Stu Finden on double bass, Paul Gowland, alto, Fiona Finden, voice and Dylan Thompson on drums. Thompson played with a drive that belied his 13 years - this guy will go far! And so the night rolled on. Dylan's brother Alex - all of 15 - played alto, 14 year old Nathan Lawson was on guitar. All three had been heard by Russell busking outside Fenwick's and responded to his invitation to jam bringing, seemingly, a bus load of supporters. Matt Jacobs took over the piano stool and gave us an idea of what to expect on Friday night at Pizza Express, Dean St., Newcastle where the Matt Jacobs Trio open up a monthly jazz gig (8pm). Rob Bates played drums as did Nick Kalenak. Nick majored in the USA and is going on to Leeds to do a master's degree. Former hit man of the Durham University Big Band Duncan Walker played soprano as did Fiona and the evening drew to a close with Steve and Joel Brown on bass and piano respectively. What a night and what a lot of talent there is around these days!